By nickyeo / April 6, 2012 / Memories of Singapore, Our Physical Heritage / Leave a comment

The idea behind the building of the National Library goes as far back as 1823, when Sir Stamford Raffles’ called for a meeting on Government Hill to discuss the establishment of a Singapore institution that would serve as an educational platform for the public.

THE BEGINNINGS
It was only in 1833 that the Library, upon donations from wealthy merchants was setup at the Singapore Free School, today’s Raffles Institution. In 1844, the desires of the wealthy and well-educated settlers led to the formation of the Singapore Library at the same site. It became a private enterprise and charged a $2.50 monthly subscription fee.

In 1887, the library was constructed at 93 Stamford Road, in a beautiful dome-shaped building that was named the Raffles Library & Museum, now the current site of the National Museum of Singapore. Its construction increased its prominence, and documentations and publications were increasingly produced. In 1920, James Johnston was recruited as the first qualified librarian and introduced the Dewey decimal classification and Brown system for the loaning of materials.

POST-WAR
During the Japanese occupation (1942-1945) the library was known as Syonan Tosyoka and was fortunate to have remained relatively unscathed thanks in part to a mutual respect between the British and Japanese at least on the conservational end.

In 1953, Lee Kong Chian a prominent philanthropist recognised the importance of promoting literacy amongst the general public and contributed $375,000 to establish a free and public library for all. Before this, the library was often off-limits, reserved for the wealthy and educated class.

The library began to assume a larger responsibility and collected copies of works by Singaporeans, particularly in our four National Languages of English, Mandarin, Malay and Tamil.

THE BUILDING OF THE PAST THAT WE REMEMBER
In 1960, with the help of some 40-odd staff transferring all 150,000 books, the National Library moved to its own building just beside the National Museum of Singapore. Many programmes like story-telling session and lectures were held to promote literacy amongst everyone from children to adults and even prisoners, largely helmed by Hedwig Anuar, the first Singaporean Director of the library.

Architecturally, the National Library will always be remembered for its herringbone brick pattern that created a homely and conducive environment for everyone. It charged a one-time entrance fee of $10 but was arguably a readily and affordable source of information for the purpose of research.

Between the 60’s to 80’s, there was no automisation and each member was issued 4 beige library cards, 1-1/2 x 3 inches each. With your handwritten name on them, the librarian would place that card in a bigger card and arranged them neatly in a alphabetically classification system. The process was done in reverse when you returned the books; fines were perhaps a more affordable 5 cents per book per day back then.

PERSONAL EXPERIENCES
I must have visited the library perhaps only about 5 -10 times in my entire life, largely because the many community libraries as championed by the National Library Board brought education to the heartlands.

Yet I fondly remember being intrigued especially by the research and archival section, where one could observe members scanning copies of newspapers and documents for research purposes. It also used to be a treat to have your books stamped with the due date and I often remembering which librarian was the fiercer of the bunch and tried to avoid her as often as I could.

Many people also associate the National Library with the famous S11 coffeeshop for its famous teh tarik, but more so because of its affinity with the majestic building. 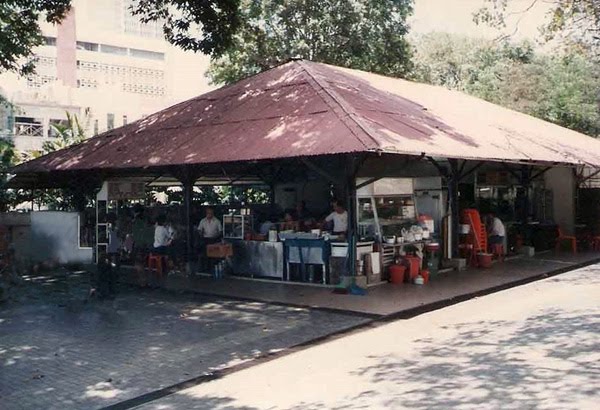 The new building at Victoria Street is now an impressive sight that holds much more activities, workshops and performances.

No doubt the old National Library had a more homely feel, the personal touch one had with librarians chopping your books being a mainstay, the smell of older books also seemed more prominent in the less than advanced air-conditioning system.

It is perhaps a respite that its demolition has ultimately led to a greater accessibility and increased awareness of knowledge and education to the public.

The beginning of an end. (Credit National Library) 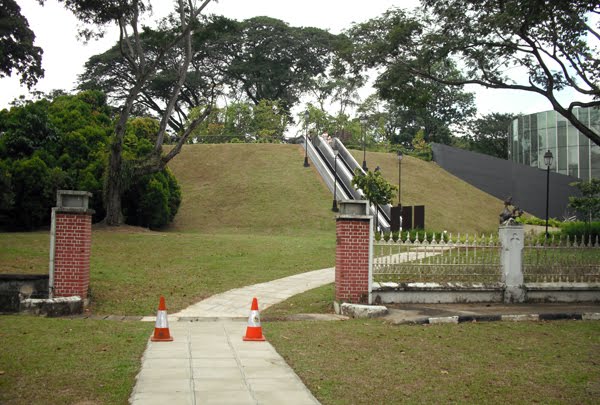 The former entrance to the National Library, no SMU building in sight.

Remember your due date.