History of music in Singapore

By nickyeo / April 15, 2012 / Memories of Singapore, Our Physical Heritage, Social history from the coffeeshop / 13 comments

The lack of historical information makes the history of music in Singapore an issue that is hard to understand, let alone debate. Yet, the diversity of music in Singapore is indeed reflective of our multi-cultural society, with the West an undoubtedly obvious influence as evident in our strive towards modernity in a post-colonial era.

For personal reasons and interests, I am more often inclined to focus on the development and demise of the Rock & Roll scene in Singapore.

Live music in the 50s could be seen as centred around the three different “Worlds” in Singapore (New World, Great World, Gay World) that merged ‘eastern’ and ‘western’ forms of entertainment in one place. Jazz and Swing music the choice tunes at the many ‘tea-dances’ held till the wee hours of the morning.

Musicians back then could be thought of as crooners in the mold of Tom Jones, accompanied by a Piano, double bass and probably a saxophone.

The 60s however brought a dramatic change, with Beatlemania and the Rolling Stones taking and influencing the world by storm.

In Singapore however, it was the 1961 appearance of Cliff Richard and the Shadows’ at the former Happy World Stadium that brought about a new legion of eager musicians, who unlike their pre-decessors didn’t study music professionally. 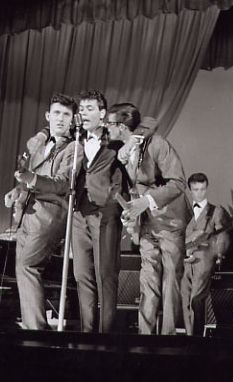 ‘and the big culture shock to the musicians of the day…especially for those of us who became established…was when the Beatles, the Shadows came…Cliff Richard and the Shadows, came to Singapore…..and all of a sudden you have a bass guitar…a very loud amplified sound…not a smooth, well-rounded and refined sound…very raw…If you describe it now, it did sound very raw…when it first came on…it was in its infancy…the recording technician had not gotten in yet…in fact it wasn’t even [mediated by] a recording technician…it was the players…the people who played it were from a different school…they weren’t qualified musicians…they couldn’t read…they just played…Half the time they couldn’t even play the instrument…sometimes its good that way because that’s how a new artform or practice evolves..
– Excerpt from Horace Wee and Sam Gan ( A narrative history of music in Singapore 1819 to the present)

The instrumental configurations of a band now evolved to having a lead-singer, three guitars (including bass), drummer and the occasional keyboardist.

Bands like the Quests and Checkmates took advantage of this opportunity, and with an array of venues ranging from hotel lounges, country clubs and even British Military camps. This led to the formation of many popular bands like Naomi & The Boys and Heather & The Thunderbirds that honed their tunes to fit the largely western customers at the ‘tea-dances’.

The Quests, one of the first few bands to breakout into the scene.

The development of Rock & Roll in the 70s however came to abrupt halt when the Government deemed tea-dances, and the accompanying music, as a source for rising social disorder. Brawls and fights were not uncommon at tea-dances, as were the use of drugs and other poisonous ‘Western influences’, described by Defence Minister Goh Keng Swee in a speech in 1973.

Let us not consider the subject of music as a trifling matter, of no import in the state of affairs. The ancients knew better. Both Plato and Confucius correctly recognised which music as an instrument of state policy could play in producing the desirable type of citizen. Neglect in Singapore on this subject has given rise to serious problems. I refer to the widespread popularity of the barbarous form of music produced by the steel guitar linked to an ear shattering system of sound amplification. Voice accompaniment takes the form of inane tasteless wailing. It is barbarous music of this kind that is mainly responsible for attracting the mindless young of Singapore to the cult of permissiveness of the western world. It is hardly a coincidence that the problem of drug-addiction has become serious where performers and audience foregather. I trust the Ministry of Home Affairs will take stern action against this menace.31

With the correlation between music and the type of ‘immoral’ citizen developing, Rock & Roll became an evident enemy of the state and many clubs housing local bands began to close, with TV stations refusing to feature male performances with long hair in what is referred to by prominent Music veteran Chris Ho (1999) as the period of the Great Concern about Drugs.

To add to the conundrum, there were a rising number of foreign bands, particularly from the Philippines that competed with local musicians. These bands were cheaper ($2000 a month for a full piece band) and willing to indulge the crowd in other sources of entertainment beyond singing, further pushing many musicians either overseas or away from the scene altogether.

Indie ends as soon as it begins

As the individuals’ sense of self-fulfillment developed in the 1980s and perceptions of over-regulation by the Government developed, a growing number of individuals arose to challenge and question their identity.

This period coincided with rise of Anarchy in the UK and a new wave of music, particularly that of Punk have a growing influence worldwide.

Influenced by the freedom and liberalization, coupled with the advances in technology that made recordings financially possible, a growing number of bands like Force Vomit, the Oddfellows and Opposition Party made a name for themselves. Individuals also helped to organize many underground gigs and slots on radio were dedicated to local musicians.

Yet for all the efforts, it was hard to beat the convenience and energy that was MTV (i.e. ‘I Want my MTV).

The accessibility of MTV evidently brought attention and dedication away from local musicians, and with continued numerous factors such as the rise of the internet and piracy leading to a drop in CD sales revenue, local musicians found themselves on the backfoot once again.

There is definitely a growing number of venues and musicians who are out to make a name for themselves, and it has been interesting to see how veterans like Patrick Chng (Oddfellows, Typewriter) have found ways to help groom and mould their fellow compatriots and future generations.

In the struggle to identity the term ‘local music’, it is perhaps easier to appreciate it as music rather than forcing an identity out of it, unless we deem Siva Choy & Kopi Kat Klan’s ‘Why U so Like that ah?’ as representative of what local music is.