Pek Sin Choon – Behind the oldest tea merchant in Singapore

By nickyeo / September 17, 2014 / Memories of Singapore, Our Physical Heritage / One comment

For fourth-generation owner Kenry Peh, keeping the business of Pek Sin Choon (白新春) going is more than just packaging it for profits. Over what else but numerous blends of his trademark tea, Kenry shares not so much a philosophy, but rather a continued desire to get people to realise the long-term benefits of tea and how sitting over a cup of it (which I literally did for over 3 hours), is meant to help us take stock of our lives, slow down for a bit and simply catch up with an old friend or two. 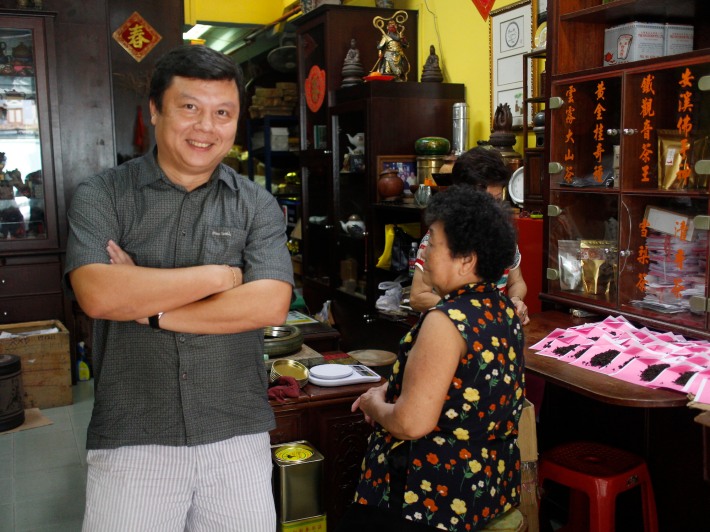 Owner Kenry Peh is a firm believer of the long-term health and social benefits of tea. As a way of keeping in touch with his Bak Ku Teh customers, he eats around 4-5 bowls of this uniquely Singaporean dish every day

Sitting at his shop at 36 Mosque Street, Kenry explains many things about tea I never knew about, all while his relatives or long-time family friends meticulously wrap tea leaves in traditional pink medical hall paper, something Kenry insists on doing despite the obvious savings by going automated.

In general there are six main palettes of tea worldwide. Green Tea, White Tea, Yellow Tea, Black Tea, Red Tea and perhaps the most commonly known to most Singaporeans, Oolong Tea, its popularity here largely due to it being found in the South of China where most immigrant groups in Singapore came from. 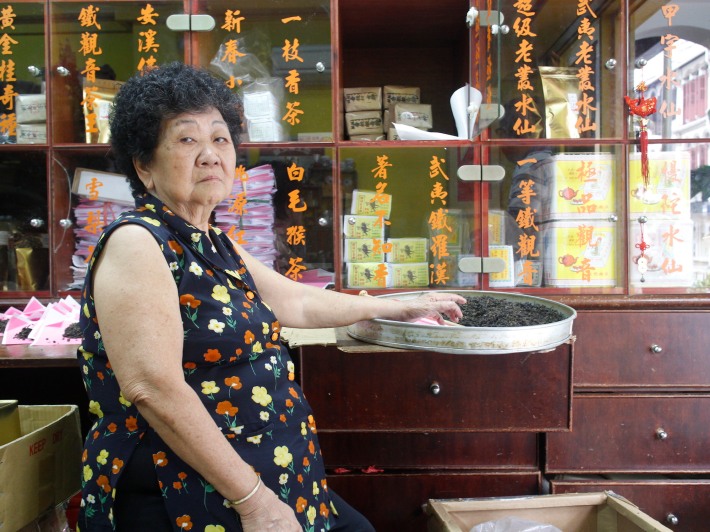 Mdm Lim, now 78, has been wrapping tea leaves at the shop since she was 20 years old.

For tea leaves like that of the Jasmine Tea (seen on the right), the fewer flowers there are, the better the quality

The beginnings of Pek Sin Choon (白 or pek being their surname, 新春 meaning blossoming or new spring) is altogether an interesting one that spans over a century, dating back to the late 1800s when Kenry’s great-grandfather first started trading with his siblings in Singapore. It was however only in 1925 that his son, Pek Kim Aw (Kenry’s Grandfather) setup shop in 1925 after years of hard work over at Geroge St. (today’s Pickering Street).

While business was decent, Pek Sin Choon only rose to prominence after World War II when it started marketing its unique Bu Zhi Xiang (不知香)  tea to Bak Ku Teh stall owners across the island. Back then and even way back to the early 1900s, Bak Ku Teh was seen as a relatively expensive dish that was only eaten by the wealthy or as a rare treat. Unlike today when it is often consumed simply as a meal, the importance of having tea or teh after the Pork Rib Soup was a way that many businessman and merchants stood firmly by, with many friendships and business dealings secured over this traditional drink.

The tea leaves are wrapped in a traditional pink and white paper usually found in medical halls, this method helps to preserve the longevity of the tea and keeps alive the shop’s cultural heritage as well

It took convincing, considering that Pek Sin Choon sold the tea leaves at fives times the nearest competitor’s price, but they stood firm to this unique mix of Wuyi Oolong and Anxi tea which often left a bittersweet taste on one’s palette. Today aside from supplying tea to 80% of Bak Ku Teh stalls in Singapore, the Bu Zhi Xiang (不知香) is a unanimous favourite at many stalls islandwide.

Kenry’s and Pek Sin Choon’s continuation of their own unique cultural branding is also a sight and story to treasure. The company’s logo of the boy on a bull, seen prominently on their signboard and packaging, is based off an old Chinese Almanac Calendar that people used to predict events like a bountiful harvest seasons or auspicious wedding dates. Whereas the brand of their Tie Kuan Yin tea (铁冠音- Iron Goddess of Mercy) pays homage to China’s victory at the 1959 Table-Tennis Championship. 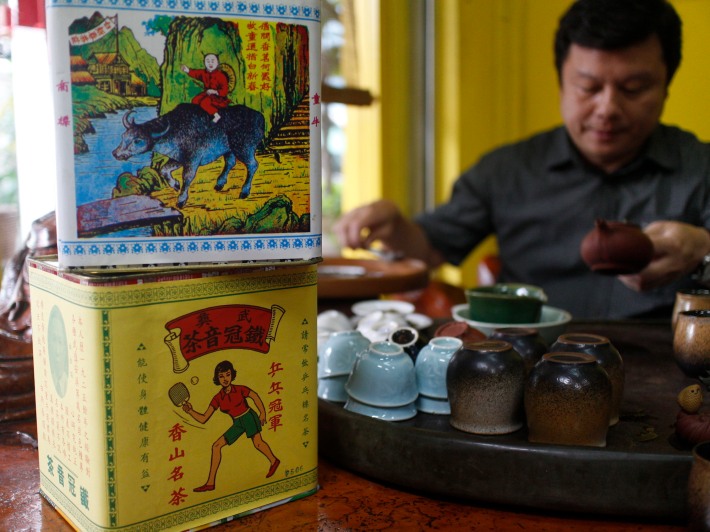 The design packaging at Pek Sin Choon is truly a tradition that’s been upheld for generation. Above is the image of the boy and the bull, the trademark of the company depicted in the town of Wu Yi(武奕)where Oolong tea originated from. Below is that of Tie Kuan Yin tea (铁冠音- Iron Goddess of Mercy) which pays homage to China’s victory at the 1959 Table-Tennis Championship.

The Tie Luo Han铁罗汉- Iron Warrior Monk brand of tea is accompanied by an image of a physically fit man, emphasising the need for healthy living to ensure the benefits of tea are enhanced

The 3 hours with Kenry perhaps passed by almost too quickly, but I did manage to bring up the topic of the use of tea in my own dialect tradition of the Hakka Lei Cha, which left me with an even deeper desire to keep my family’s traditional dish going.

Kenry also acknowledges that the idea behind tea consumption has changed immensely over the past few decades, with many more trendy Western infused flavours and Bubble Tea flavours taking precedence over the more ‘unsavoury’ traditional tea types.

While he and Pek Sin Choon will still continue to stand by the benefits of their tea done in a traditional way, Kenry also hopes that the ‘modern tea’ will continue to provide an avenue for people to meet and sit back to take stock of their lives with one another.

A good grade of tea leaves would only require a single gram to brew a single pot, compared to 10-12g for a lesser grade

Located at 36 Mosque Street, Pek Sin Choon has been at its present site since 1988 and says it is key to be in the central area so that its loyal clients have a commonplace to gather throughout their later days