By nickyeo / December 11, 2015 / Memories of Singapore, Our Physical Heritage, Social history from the coffeeshop / 2 comments

“Aunty 有没有英文的歌?” (do you have English songs)

So began my conversation with 75-year old Mrs Wong, owner of the institution that is Foo Leong Record Store (富 良 唱片), a mainstay that has called Chinatown its home for over 40 years.

Even Chinatown gets its own little dose of Bieber Fever.

Foo Leong (富 良), which means ‘prosperity and good nature’, also happens to be the name of Mrs Wong’s son. It was formerly located as a street stall along Pagoda Street before moving in to Chinatown Complex in 1983.

Mrs Wong, who prefers conversing in Cantonese, counts the likes of Hu Yin Yin and Zhou Xuan as her favourite singers of all time. Though I had no idea who these two superstars of her generation were, the resonance of that distinctive Cantonese classic tune (think Jacky Cheung) around the store provided a glimpse of her acquired taste in music.

Like many older shopkeepers, Mrs Wong’s store is a surprisingly compact space filled with foldout CD racks and shelves that fit neatly into an area no larger than a traditional HDB balcony.

Despite an area no larger than perhaps a HDB balcony, Mrs Wong makes the most of the space with the help of collapsable shelves and CD racks. 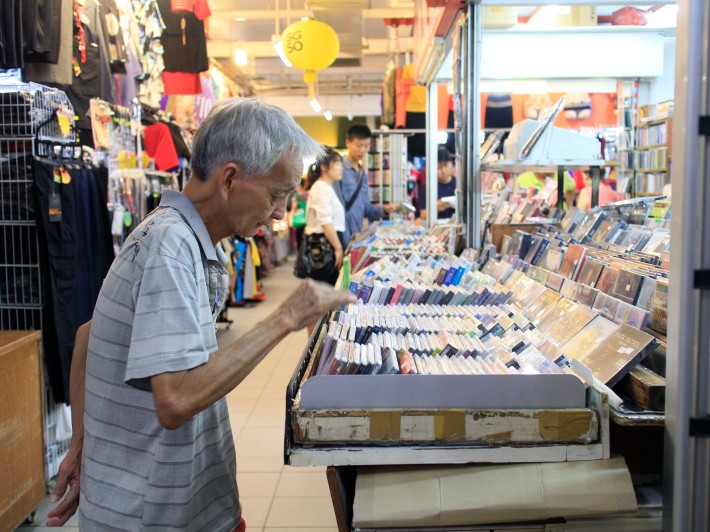 An atypical patron often associated with Chinatown itself pays a visit to the store.

75-year old Mrs Wong stands proudly with the shopspace that she’s called home for the past 32 years.

Here you won’t find CDs nestled chronologically into billboard charts or by alphabetical order, rather, its neat but rather confusing layout forces an intimate browsing on the part of the customer, most of whom spend at least ten to fifteen minutes idly picking up CDs, just like how most of us used to.

I naturally gravitated to the English section which seemed like a mimicry of my bad taste in 90s music, filled with Sugababes and a young Miley Cyrus. Thankfully, a quick step over brought some much-needed respite in the form of Miles Davis and Santana standing side by side.

Many former customers have noted that despite rising costs, Mrs Wong has managed to keep the prices of her CDs low, which made her quite an icon in the glory days of music when album releases actually meant a boom in business.

Up till the early 2000s, younger customers would frequent the stall due to its considerably lower prices when compared to major record outlets.

Like many music wholesalers, Mrs Wong laments the digital age of music, though it’s pretty obvious that she hasn’t caught up to speed with the likes of Spotify. Like the estimated 700 stall owners located within Chinatown Complex, the friends made and memories built are perhaps the only thing that keeps her going, a goal that she says she’ll stick to till she can go longer continue running the business.

Prior to moving to Chinatown Complex, Foo Leong Record Store was a roadside stall in the vein of the modern Pasar Malam (night market) right along Pagoda Street.