For 24-year old Shujjal, who recently appeared in a play titled ‘No Man’s Land’ as part of the 2015 edition of OH! Open House edition-Joo Chiat, Dibashram has been his home away from home for the past two years, a communal-cultural space where he gets to express his love for acting, while fellow compatriots dabble in literature, music and even playwriting.

Started in 2011 by Mr Moshin, the centre is perhaps most renown for its initiation of the Migrant Workers Poetry Competition, an annual affair that actually began in 2008, but only rose to prominence during the 2014 edition. It also serves as a gathering space for contributors to the ‘Banglar Kantha’, a Bengali newsletter that’s been headed by Mr Moshin since 2006, and distributed to the estimated 160,000 Bangladeshi Migrant Workers residing in Singapore.

Mr Moshin first came to Singapore in 1991 to finish his studies, during which he served as a letter writer for Bangladeshi workers in the Little India area. Seeing a need for a cultural outlet, he first setup Banglar Kantha in 2006 before Dibrasham came along in 2011. Yet times have caught up with the centre’s operating cost.

Started in 2006, the Banglar Kantha is distributed to the estimated 160,000 strong Bangladeshi Community in Singapore. Like any regular newspaper, it has a talent pool of some 60 writers, many of whom submit their articles via their mobile phones or even to Dibrasham’s Facebook Page.

Shujjal, 24, showing a clip of his performance titled ‘No Man’s Land’ that was a feature at the 2015 edition of OH! Open House – Joo Chiat.

To the artfully aware, the diversity of this non-profit institution is acutely reflective of the late Kuo Pao Kun’s vision of the iconic Substation, which is to be a multi-disciplinary arts centre that provides a shared space for all those who are interested. For many, the space is a welcome release from the laborious tasks that many undertake in Singapore’s impossible tropical weather, which is mainly work in property development and shipyard construction.

The time spent here by the individuals is precious, as contrary to Manpower laws, a good number continue to work up till 5pm even on Sundays, meaning it’s a quick shower in the dormitories before most of them arrive as just past 6pm, even if it’s only for an hour or two. 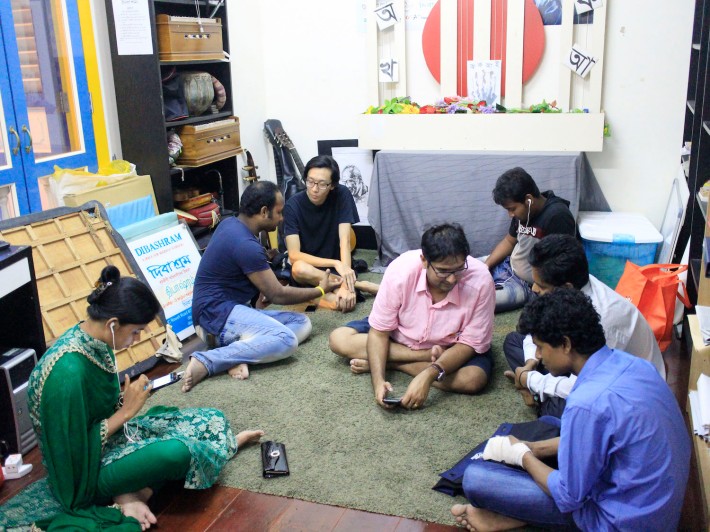 Workers chatting and sharing their experiences with one another on a Sunday evening.

‘The Life of Migrant Workers’ by Hasanur Reza Zimy, who works at a Shipyard, is a photo exhibition currently on display at Dibashram.

Traditional Bengali instruments are available for free to those keen to express themselves through music.

Yet for Bellal, 24, who writes columns on film and history for the Banglar Kantha, and is a published author back home, the journey here from his dormitory in Sembawang is absolutely worth it.

“As long as people feel good about my writing, I’m always happy,” says Bellal, who despite a recent incident on the worksite, continues to handwrite his article whenever he’s available, which typically is a short window from 8pm onwards in his dormitory.

Bellal, who was recently injured in a worksite incident, has been coming to Dibashram for the past two years. A published author back in Bangaldesh, he contributes to the history and film column of the Banglar Kantha.

Dibashram, which means ‘day-care’ in Bengali, is a quiet second-storey space located at Rowell Road.

While Dibrasham’s importance as a cultural space has been highlighted by big news agencies like Straits Times and even BBC, it’s significance is still overshadowed by the many social ills that continue to plague Singapore’s Migrant Workers, particularly rogue agents and unlawful dismissal by employers.

With an estimated monthly operating cost of $5,000, Dibashram, which means ‘Day Care’ in Bengali is also facing an impending closure due to a lack of funds. If you’re interested to help keep this place going, donations can be made HERE.