A look inside St Joseph’s Church

Easily recognised by the blue dome that sits atop an octagonal belfry, St Joseph’s Church is one of Singapore’s oldest church, a national monument, and a site that represents a rich part of the Portuguese and Catholic history in Singapore. 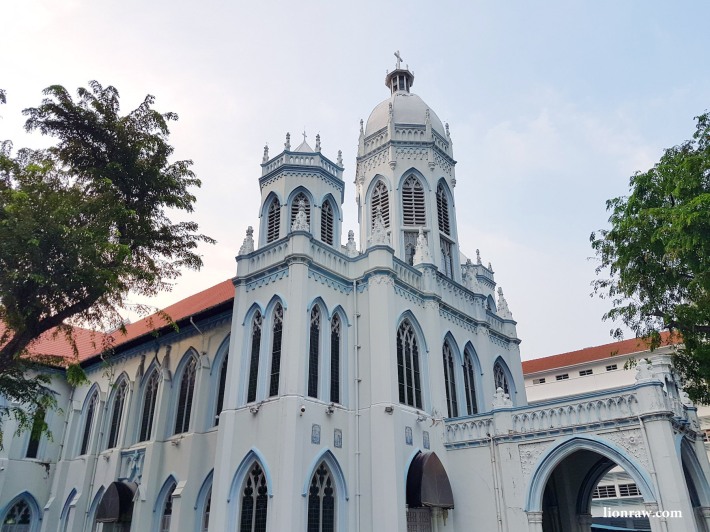 From along Victoria Street, the iconic octagonal belfry and accompanying dome of St Joseph’s Church can easily be recognised.

The foundations of the church began in 1825, when Singapore’s first official priest, Father Francisco da Silva Pinto e Mala, arrived and founded the Portuguese Mission in Singapore. What was then just a handful of Catholics soon grew with the influx of Europeans to the young city. This led to the initial construction of the church back in 1853, just three years after Father da Silva passed away due to illness in 1850.

The church gets its name in recognition of Father da Silva’s tenure as a professor at St Joseph’s Seminary in Macau, as well as the fact that the land the current church sits on, was paid for with funds from St Joseph’s College (Macau). 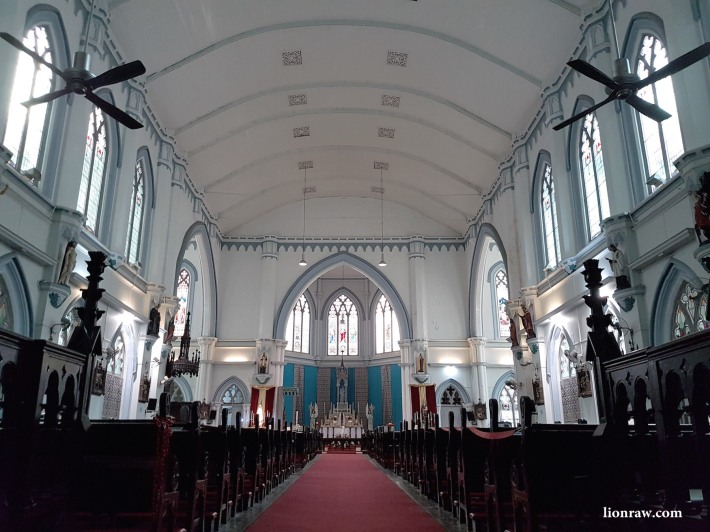 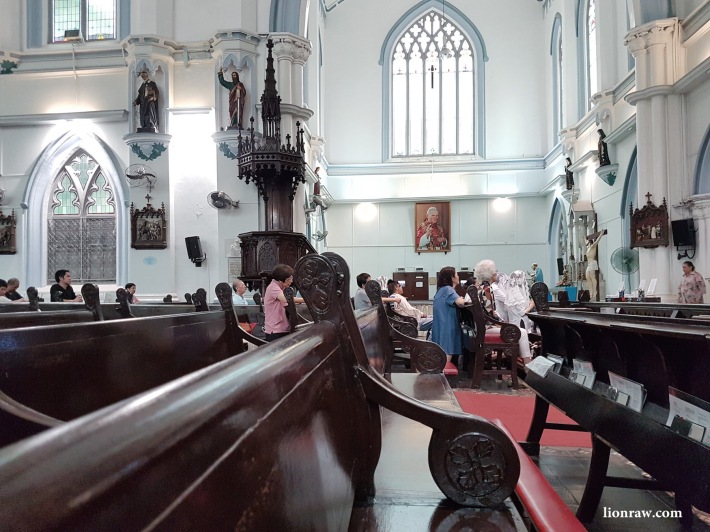 By 1906, the former church was demolished to make way for the Neo-Gothic style monument we know today. It was designed by David McLeod Craik, a famous architect who would go on to join to renowned Swan & Maclaren just a few years later.

Completed in 1912, the church is built in the plan of a Latin cross. The façade is characterised by the generous use of lancet arches along with blue-and-white ceramic tile-work called azulejo, a common material used in Portuguese buildings. Above, two smaller cupola-like towers, each with a Latin cross erected on top of it, accompany the main dome. 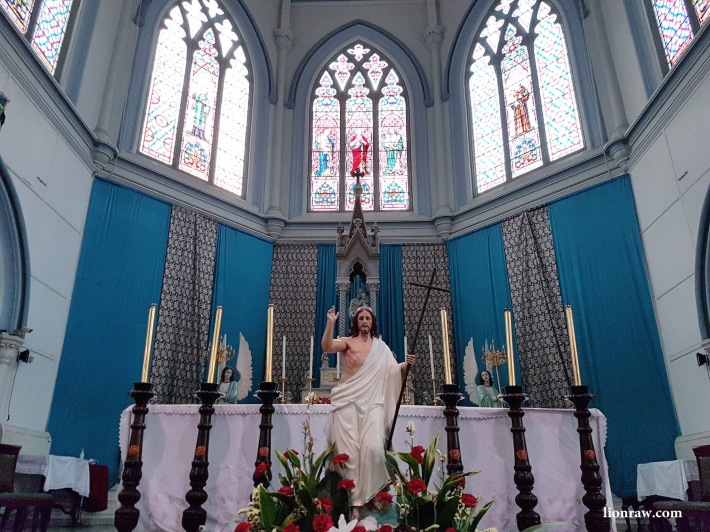 Like many Catholic Churches in Singapore, the altar is gloriously decked out with fabrics according to the various ‘seasons’ of the year. At the back, some of the most amazing stained glass windows in Singapore. 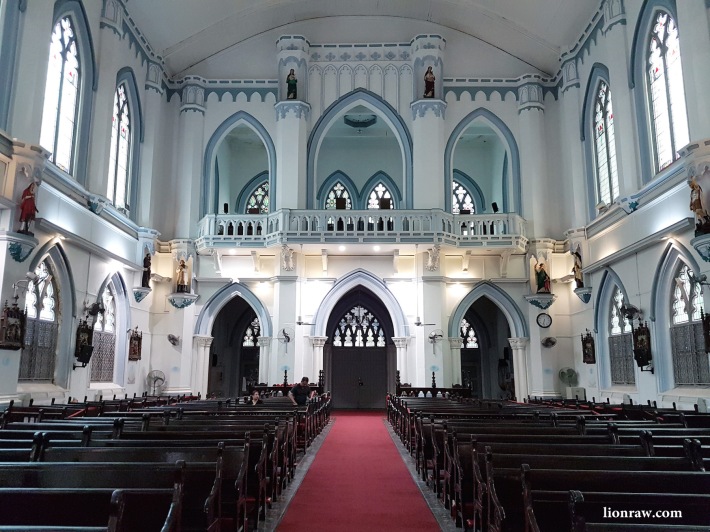 The sight of the main entrance of the church is a geometrical marvel. The second floor is often accessible only during special services such as Easter, where crowds here can swell up way past the 1,500 the church is able to hold.

However, it is the interior of the church that really provides a captivating sight, whether you’re a parishioner or just an admirer of architecture.

The towering ceiling alone is a masterpiece of masonry that takes your breath away. Along the sides, the church is home to one of Singapore’s largest collection of religious stained-glass windows, designed by the world-renown Jules Dobbelaere. Each piece sits stoically within the beautifully aligned arches. 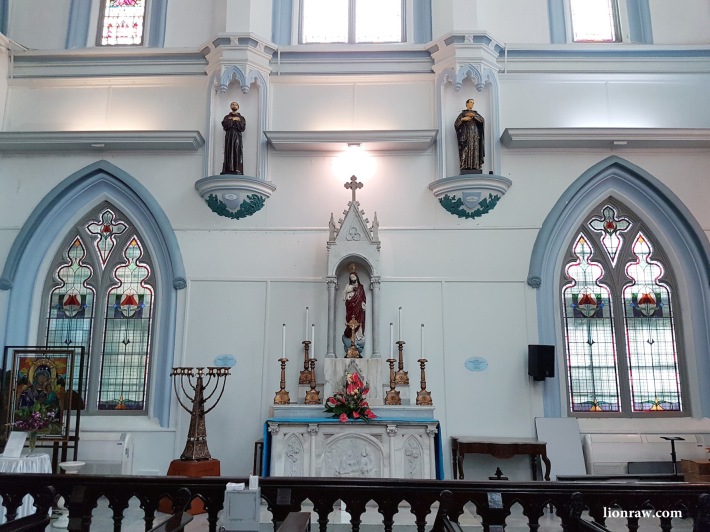 St Joseph’s Church is also home to a series of small altars that are devoted to other patron saints and serve as a separate space for prayer. 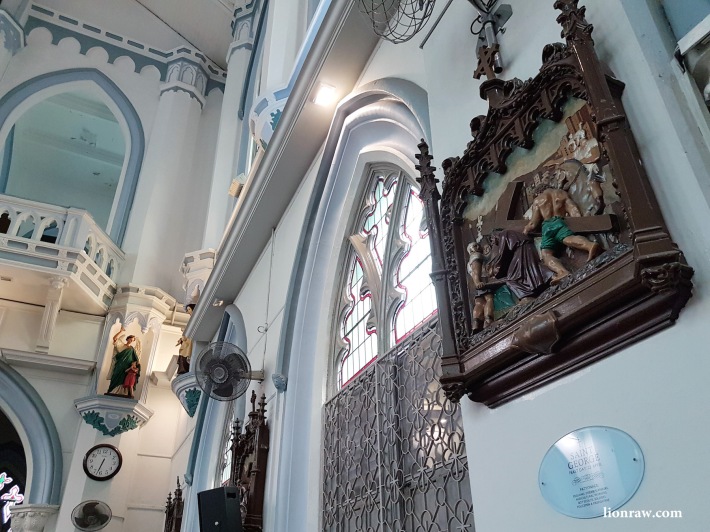 One of the 14 stations of the cross, a period that details the crucifixion of Jesus is a common depiction found in many Catholic Churches.

As one walks down the aisle towards the altar, it becomes apparent that much thought has, and continues to be given to the use of fabrics to denote the religious significance of the statues of Jesus, Mother Mary, and St Joseph, the patron saint of the church.

St Joseph’s Church is also home to Singapore’s only original Ambo, a semicircular extension from the main pillar used by the priest to conduct their sermons. Like others around the world, it is a replica of Constantine’s eight-sided Ciboria Ambo (Edicule) that sits over the tomb of Christ.

St Joseph’s Church continues to practice many Portuguese religious traditions, including the re-enactment of the death of Christ on Good Friday, and devotions to Our Lady of Fatima on the 13th day of each month. It was officially gazetted as a national monument in 2005, and can hold up to 1,500 during each service, though that number swells up to almost 3,000 during key events such as Easter and Christmas. 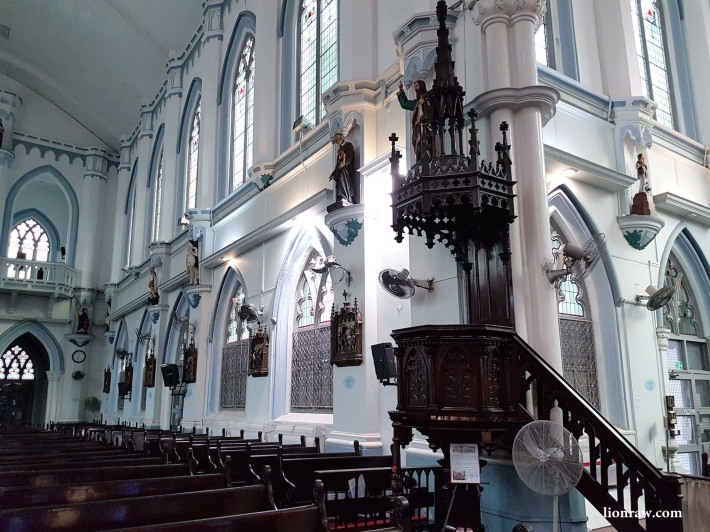 St Joseph’s Church is home to SIngapore’s only original Ambo, a semicircular extension from the main pillar formerly used by the priest to conduct sermons.

St Joseph’s Church is also home to a series of small altars that are devoted to other patron saints, and serve as a separate space for prayer.